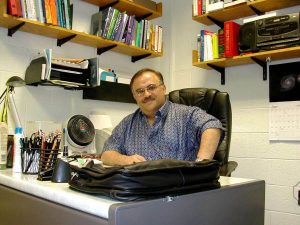 by Jimm with No Comment Uncategorized
“HELL HATH NO FURY like Oxygen with unpaired electrons!!”
Ignacio Ocasio, Teagle Professor of Chemistry, CWRU

Case Western Reserve University’s beloved “Doc Oc” was a character the likes of which you meet once-in-a-lifetime.

He was renowned for his ability to know the name of almost every incoming freshman as they arrived on campus.  During the CWRU application or acceptance process, students were asked to provide a photograph to the University.  He would get a hold of these photos, then while teaching his summer lab class, scan each one. He would crop it to a mug shot and label with the student’s name and make this his screen saver. Then he would fly to Puerto Rico to visit his mother for the rest of the summer and write the following year’s homework while learning names sitting on the beach. Then he would return to teach another year and repeat the process as he did for over 30 years. He never married, had children or even a fish tank. His life was CWRU students. Many students coming to Case are pre-med hopefuls or engineers, so most of them had to take his introductory class.

When he returned to his office for Fall semester, several students would be waiting for him to open the door, just as they do after every class.  His office was full of students all day long in perpetual Chemistry tutoring and many spent just as much time at his apartment, watching football or movies or listening to him play piano. He was the consummate carrier of CWRU Team Spirit, appearing at football games, the ‘Hudson Relays’, judging “Mr. CWRU” and attending most social events. Doc Oc was considered by many to be his or her “actual” college advisor, including by yours truly. He would look you in the eye and give you the most honest opinion a person could give (often under his breath with sidelong glances).

Professor Ocasio was also a brilliant pianist. He was actually pursuing Grad school for both Chemistry and music at the same time. I don’t remember if he went to the Peabody Conservatory or turned it down-that may be part of the story, but when his father became terminally ill, he felt that he had to chose between the two, so he chose Chemistry.  One day he was asked to teach a Chemistry course for nurse and never looked back.

Things were not always easy for Doc, though.  He never Published and if memory served was never tenured. So every time money problems came up, CWRU would float the idea of canning Doc Oc, prompting near riots, circulating petitions and impassioned letters to the campus newsletter, which they surely expected because it happened every time they did this. He even faced some harassment concerning his Puerto Rican heritage from some miscreant students.  As a non-traditional (very old) student who actually took his introduction course twice (once in ’96 then ~2003 as a refresher concerning my employment) He talked very openly with me whereas he wouldn’t even curse around undergrads. I know a lot of his opinions of some inner-workings of CWRU and his perception of the shift in the general personality of students from 1980 to 2005. He gave me many insights and comforts in a very competitive, high-stakes environment and always made me feel that it was no B.S.-despite his manic, coming-from-all-directions, over-the-top energy that made you question if you were in the same quantum state as he (that’s a Chemistry joke).

In 2005 Doc Oc passed away suddenly at the young age of 53, anguishing thousands who responded passionately.

In morbid hilarity, Doc Oc already had his funeral-including music- planned and we followed it to the ‘T’ at Harkness Chapel with his mother and sister attending.

In 2008, We cast his likeness in Bronze by the Hudson Relays Rock, facing the incoming pathway so that he could greet all that are coming to the Quad.
Doc Oc’s Hudson Relays
Not Doc Oc, but this was his Lecture Hall.

The “Hey, Thanks!” Series will be about the people who made me love learning life sciences and love teaching them even more.  They sit on my shoulder as I try to replicate for others what they did for me.

Only Online for now
Please use Contact form or Email