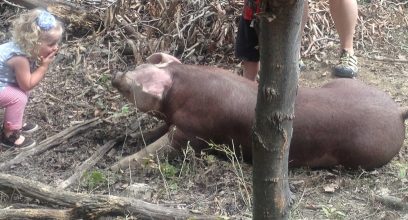 This post depicts the act of turning an animal into food.

Some may find it gruesome, which may be indicative of a disconnect that is ultimately unhealthy for you and possibly more dangerous to the animal’s welfare.

Many of you know it as Head Cheese or Brawn, if you’re British. Some confuse it with Scrapple (Head cheese + corn meal) which is similar to Goetta (with oats) which is popular in Cincinnati. It can be made into a Terrine, or loaf and sliced for sandwiches, but I prefer to prepare it the way my grandmother did, which is canned in mason jars. As a kid we used it as a sandwich spread, but I spoon it out and pan fry it.

My particular Hillbilly heritage hails from the Big Savage Mountain area of the Alleghenies. We’re from Frostburg & Cumberland, MD and Salisbury, PA. We’re mountain folk who tended to be Methodists, whose preachers had no church hall, but rode a circuit on horseback with little more than a blanket- traveling to the isolated hillfolk to spread the Gospel. We are also the type of hillfolk that call headcheese,”Souse”, which is also how we describe being drunk.  Getting “soused” and staying “soused” is all my people had to do when snowed in from harvest-time to spring thaw.

I am fortunate enough to be able to source pig heads from a local farm called New Creation Farm. I understand that in some parts of the country, Walmart carries frozen pig heads.  God Bless. But I try to source local meats from places where I am fairly certain I am aware of their husbandry practices.

This is how you sneak a pig head into the house. This is all your wife should see until the canning is done. Even then, it’s best to have a hiding spot in the basement (not for the processed jars, for you). Take a spoon.

Prepare your work-space out of doors, if you can. Especially if your wife has locked you out of the house.

Here’s how it looks when you first unwrap it. It needs a little shave. Some people have a (hopefully) dedicated straight razor just for this job.

I, however, just use a torch. Don’t forget to get deep into the ears.

The Foxfire Book‘s second chapter concerns a couple of young guys who are helping an elderly lady named “Aunt Arie”  butcher a pig head.  There is a humorous moment when she digs one of the eyes out with a butcher knife and flings it outside, onto a near-by tin roof and it rolls off and hangs “bobbing on a clothes line”. They ask her if it bothers her and she replies, “I don’t care fer’t bit more’n spit’n’th’fire”.

There is a Department of Agriculture stamp. I don’t know if it’s edible. I cut it off just to be safe.

I also remove the ears.  Some people don’t, they add it to the Souse.  But some complain that the ears are too gristley. I don’t know because I don’t want to risk making a whole batch that is not to my liking, so I remove them just in case. There are recipes out there for just the ears, so maybe I will try one of those one day but it hardly seems worth it for two ears. I throw these into the woods for the animals and let the thought of one of the neighbor dogs running home with these or a skull entertain me.

Next I cut them down to stock pot size with a Sawzall fitted with a long wood blade. You see here in the cross section the hog jowels- pretty much the most delectable meat on the planet. Like a butt roast, it is strong, well-used muscle that must be cooked slow and low into a mouth-watering thing of beauty.

If you can get a hold of some trotters, they add a lot of gelatin (aspic) to the mixture and help a lot when trying to get this to set up if you choose to make a loaf instead of canning it.

You can throw anything you like in at this point. Use spices, trotters, herbs (traditionally Sage), vegetables-whatever suits your fancy. This is your time to make a personal recipe they will be begging for at the company pot lucks. If you are uninspired or not handy with spices, search for bone broth / soup stock recipes and use those spice mixtures. Here’s a simple one that I enjoy. Start here and let your imagination run wild.

Next boil it forever. The longer you boil it, the more you will cook out of the bones.  I suggest 6-8 hours at minimum.  I often simmer it overnight and if I can stand it, 18 hours. This would be a good project on a wood stove.

I was visiting my cajun-country friend not long ago and he had recently taken his kids on a pig hunt. Feral animals of the Porcine persuasion are BIG TROUBLE in the South and they are heading north.  They are super-aggressive, a threat to children, property (I’ve seen full-sized pig roadkill – imagine THAT crash!) and the environment. If you go on a feral pig hunt, you are a hero to society. Them Cajuns trap wild piglets and raise them in pens for a season or two. WHAT A LIFE, Guys!

So my cajun-country friend and I decide to make some souse in a a Crawfish boiler.   Taking a cue from the bone broth recipes, I had been adding vinegar early on in the water to leach calcium out of the bones.  I said, “OK, add a bunch of vinegar”. I meant a few good splashes. After I heard about the 10th, “glub-glub-glub” I looked over to see that he had added about 1/3 of a gallon of apple cider vinegar.

Here I am coveting. I need one of these crawfish pots SO BAD!!

I was worried, and for a moment assumed we had ruined it.  But the end result was delicious. He set it up as a loaf-style terrine. And the skull was so soft I could crush it with my hands (but I left it for his kids to play with).  That bony goodness was now bio-available, set in aspic. For the love of Ted Nugent.  So don’t be afraid of vinegar.

Next, remove the head from the water. Be careful because it is pig-fat slippery and will fall apart and splash into the boiling water if you’re not careful. It is easy to pick the bones out at this point.

A quick hammer whack will get you to the brain. Be sure to keep yelling “BRAAAAAINNNNNN…MORE BRAINN!!” to the annoyance of those around you.

(no one will be around you)

I try to grind it as fast as possible so that I can hot-pack into the Mason jars. Or I keep it hot in an electric skillet, either loose or in unsealed jars. Try not to think about The Wall. Damn You, Roger Waters! Or if you’ve ever been to a GWAR show…

If you cook a long time or add a trotter or two, the bone broth will be so thick and gelatinous, you can stand a heavy spoon in it once it chills. Lovely for your hair and nails. Also it is a source for much-needed Glycine.

If you are on a budget, this is the way to feed your family.  A $15 head will give you several quarts of stock and many pounds of meat. One day I will figure out the calorie price. You can’t beat this anywhere and it’s such nourishing meat.

I’ve been experimenting with smoking the head instead of boiling. I was VERY happy with this. And the big pressure canner is big enough to accommodate a whole head. I don’t need to use the sawzall.

Since I don’t have a great smoker, I finish it in a pressure cooker with very little water – you can still the Stock spices if you like. When you do it this way, you don’t lose the fats into the broth. It gets mixed in with the meat canning. The smoked head is hard as shoe leather. Once again, I was convinced I had ruined it, but it softened beautifully in the pressure cooker.

This is what a smoked head looks like after pressure cooking. Spooky, no?

Here’s a jar of smoked souse in front of “regular”. It has a very rich, dark color and visibly more fat- great for us ketosis junkies.

Here we’re packed and ready for the canner. Use your canner’s instructions.

I’ve even tried a dry brine. I like what “Meathead Goldwyn” has to say about dry brining as opposed to bath brining over at Amazing Ribs. I also find this science of brining article helpful not only for meats but Lactofermentation of vegetables.

My favorite preparation is just nested within (or next to) a bed of Collard or Mustard greens. Here, served with the bone broth and pink salt. I also love to toss the greens in flavored vinegar.

Another is rolled into steamed or blanched Chard leaves which are crisp and bitter enough to mitigate the high-fat mouthfeel of the souse which is salted and cooked to just a little crisp. I just need to come up with a sauce now. I’m thinking Sage-based. I may add a filler (more greens?)

And at the end of the day you have a new toy! Play ‘Lord of the Flies’ or make a scarecrow or marionette. Give it to the kids for crafts. Or just hope one of the neighbor dogs picks it up. It’s the gift that keeps on giving. I usually chase my wife around with it, making it yell, “Sucks to your ass-mar, Piggy!”

I will keep updating this post as the experiments continue.

Lastly, the number of youtube videos about this this are finally growing but here is my favorite. Dude just cuts it off the skull and rolls it into a loaf. Forgive his hairstyle.  I will definitely be trying this technique one day. I think I need a better knife first.

Only Online for now
Please use Contact form or Email